Ltc. Oscar Partuza in his report presentation, alias Bong and alias Igong, Commander and Vice Commander respectively surrendered to 3rd Infantry Battalion after an encounter on March 22, 2019. They carried with them two M16A1 rifles, one caliber .45 pistol and one 9mm Glock pistol.

While undergoing debriefing the two further revealed information that led to the recovery of an M4 carbine and six other M16 rifles.

Ltc. Partuza said that the encounter, which is a prelude to the surrender, transpired while the troops are on the process of validating the information of the presence of Communist NPA Terrorist Group (CNTG) members in Barangay Tambobong, Baguio District, Davao City.

The five-minute firefight resulted in the death of one CNTG member and the capture of one M16 rifle and one cal. 45 pistol.

Prior to the encounter and surrender, the people of Barangay Tambobong have already declared the CNTG as persona non grata in their Barangay and Tribal Communities on February 25, 2019.

In her short dialogue with the two leaders, Mayor Duterte-Carpio informed them of their free access to government programs, and further encouraged the two former CNTG Leaders to reveal their reasons and issues for joining the armed group so that the City Government can address and attend to.

Meanwhile, Lt. Gen. Santos reiterated the call to the NPA to surrender and for other stakeholders to assist in facilitating. 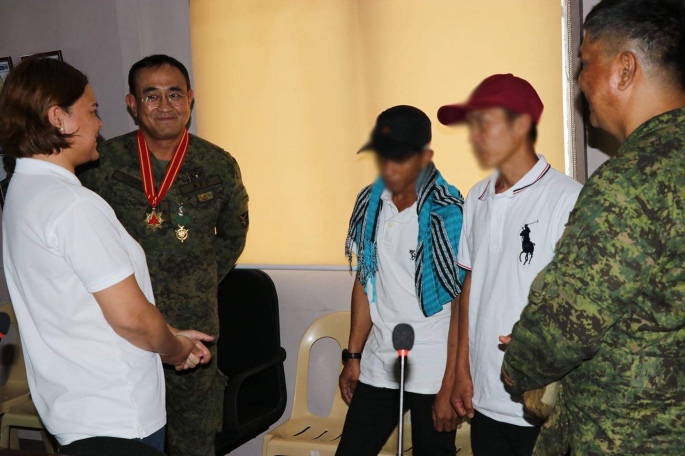 “With the help of our different stakeholders who always there to help, come down and avail of the social reform program of the government for you to rejoin the mainstream,” Lt. Gen. Santos said.

“The surrender is proof that the NPAs are now losing not only regular members but also leaders,” he added.