At the Second Belt and Road Forum for International Cooperation held on 26 to 27 April 2019 in Beijing, the President articulated key Philippine positions to advance and sustain global growth and development. 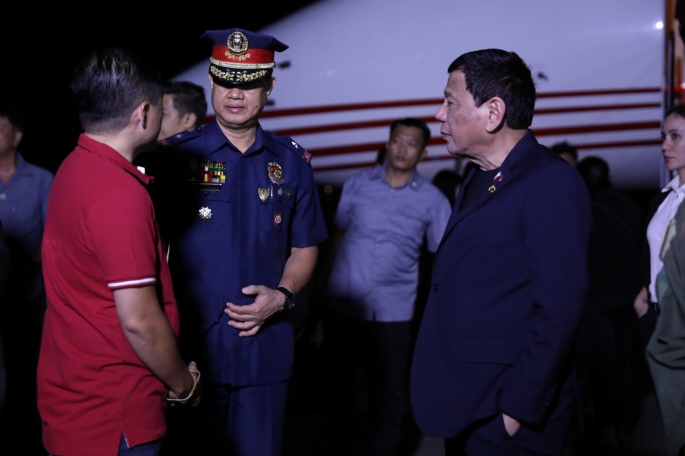 The President called for enhanced partnerships to address transboundary development challenges in order to achieve inclusive and sustainable growth, stressing the importance of multilateralism based on respect for sovereign equality.

The President cited the need for a fair and equitable rules-based regime which governs the relations of states, global trade, and the use the world’s oceans.

The President likewise highlighted the important role played by organizations, particularly ASEAN, in the evolving regional and global architecture. He underscored the platforms provided by ASEAN as ways to engage the international community positively to advance connectivity, sustainable development, and equitable growth.

Emphasizing the human dimensions that need to be promoted and protected in a world desiring growth, President Duterte raised attention to protecting and upholding the rights of migrant workers. He said connectivity meant more than building roads andbridges, but also safeguarding the human nodes of connections that made possible the exchanges of skills, ideas and experiences.

At the Leaders’ Roundtable Session III, the President reiterated the need to build strong partnerships with like-minded states, multilateral institutions, and other stakeholders that share the Philippines’ vision of securing a stable, peaceful, and resilient international community.

The President underscored that an effective belt and road cooperation should be an exercise of responsible and effective partnership for inclusive and sustainable development. He championed cooperation in infrastructure development, agriculture development and green technology and renewable energy as concrete measures for action.

President Duterte also expressed grave concern over the impact of more frequent and more intense disruptive weather on developing countries like the Philippines, and called for greater principled, concerted and collective action on climate change. He thanked countries for assisting the Philippines in times of calamities and called for proactive rather than reactive measures to climatic events.

He urged countries to act, rather than just meet, and to ensure that all of the countries, particularly economies that contribute greenhouse emissions be made accountable. President Duterte called for the effective enforcement of the world’s commitments to address climate change.

President Duterte also underscored the need to improve regional and global capacities to manage and protect marine resources, citing that the world’s seas and oceans are vital sources of sustenance and livelihood. He emphasized that it is the collective duty of the international community to promote the sustainable and peaceful use of these bodies of waters in accordance with international law.

The Philippines’ participation at the Belt and Road Forum (BRF) demonstrates the country’s support for enhanced regional and global connectivity to promote deeper economic integration.

The Philippines and China renewed their commitment to bolster bilateral relations based on mutual trust, respect, and friendship. They agreed to further deepen Philippines-China strategic cooperation, particularly in the areas of security, trade, and investment to support common development goals, including the Administration’s Build, Build, Build program.

In both meetings, the Philippines and China agreed to continue working closely to ensure peace and stability in the South China Sea and address differences through consultation.

The Philippines and China expressed hope for an early conclusion of an effective and substantive Code of Conduct in the South China Sea, which will be a vital instrument for the maintenance of peace and stability in the Asia Pacific region.

President Duterte and President Xi also witnessed the signing of the Handover Certificate Grand-Aid for the Dangerous Drug Abuse Treatment and Rehabilitation Centers Projects in Sarangani and Agusan del Sur and Exchange of Letters on the 2019 China-Philippines Production Capacity and Investment Cooperation Project.

President Duterte also met leaders of Philippine and Chinese business conglomerates in the manufacturing, energy, steel, and infrastructure industries. He witnessed the signing of 19 business deals worth over USD 12 billion which are expected to generate more than 20,000 jobs.

The President’s visit to China – his third since assuming office in 2016 – further revitalized bilateral relations which will redound to greater socioeconomic benefits, peace, and stability for both countries. END

One of the surrenderee was identified as @ALEM, 21 years old, a resident of Malabon City and former Political Guide of CPP-NPA Terrorist Group that is being monitored in the tri boundary of Davao del Norte, Agusan Sur and Compostela Valley.

In her revelation during the press briefing, she said that she was a 3rd year BS Architecture student of Polytechnic University of the Philippines (PUP) in Sta. Mesa, Metro Manila and was an active organizer of several left-leaning youth organizations such as the League of Filipino Students (LFS) in PUP, Anakbayan in Caloocan City and Pandi, Bulacan, and Samahan ng Kabataang Demokratiko sa Asyenda Luisita (SAKDAL) in Hacienda Luisita, Tarlac City.

She further said, that together with other 24 students from Manila joined the return of the participants of Manilakbayan protest march to Mindanao on September 2017. They joined and together organized the rally of Madaum Agrarian Reform Beneficiaries Asaociation Incorporated in Tagum City, Davao Del Norte before their immersion and eventual integration to the New People’s Army in Mindanao.

Together with her live-in partner @Jinggoy, former CO of the unit of the armed group in the tri-boundary of Compostela Valley-Davao del Norte and Agusan del Sur, whom she met in the organization, they voluntarily surrendered on April 22, 2019, to Ltc. Jaime Datuin of 75th Infantry Battalion in Bislig, Surigao del Sur after they were disillusioned on the authoritarian policy of the armed group.

Their wish to surrender was further boosted when they were encouraged by the parents of @Jinggoy. Along with them is their 4-month baby boy.

The surrender of these seven CNTs was facilitated by the different government agencies and Barangay Council of Colonsabak, Matanao, Davao del Sur. With them are their high powered firearms composed of one Bushmaster Rifle, one M203 Grenade Launcher, one Baby Armalite, on M16 Rilfe, M14 Rifle, one Garand Rifle, and ammunition.

Tired of running, hiding, and walking to include lack of sleep and starvation, the seven saw a glimpse of hope after reading a leaflet from aerial dropping and tarpaulin posters containing information about Enhance Comprehensive Local Integration Program (E-CLIP).

During the turnover, the DSWD and DILG representatives committeed to assist the surrenderees as part of their mandate in the implementation of E-CLIP and the would be implemented National Task Force on Ending Local Armed Conflict which was signed by President Rodrigo R. Duterte last week.

Meanwhile, Lt. Gen Santos gave emphasis on the case of @Alem as a classic example of NPA’s student recruitment.

“Alias Alem is a classic example of how NPA recruit students. They deceptively indoctrinate students using social issues to mask their real objective until they become student activists, joining and organizing rallies and undergo exposure and immersion with the armed group before finally integrated,” Lt. Gen. Santos said.

“Let this be known by our parents, teachers and learning institutions in order to prevent our youth to be recruited to the futureless armed group,” Lt. Santos added.

In the morning of Easter Sunday, April 21, 2019, Davao del Sur Provincial Office and 39th Infantry Battalion, in a joint effort, facilitated the surrender of four CNTG members at Dongan Pekong, Matanao, Davao Del Sur after the community sought their help on the said intention of the CNTG members.

The surrenderees were identified as alias TONTON, alias CARDO, alias BUDDY and alias JOANA all elements and members of the CNTG in the above-mentioned area. They brought along with them three High Powered Fire Arms (HPFA) one Bushmaster rifle, an M203 Grenade Launcher and one baby armalite rifle.

Earlier, in the morning of Good Friday, April 19, 2019, three CNTG identified as alias Dante, a Vice Team Leader; alias Jek and Alias Garry, both elements, surrendered also with the help of the community to the same combined group of Police and Military units bringing along with them three fire arms (M16, M14 and Garand rifles) at Barangay Colonsabak, Matanao, Davao Del Sur.

The surrenderees, who were members of the CNTG being monitored in the quad boundary of Davao Del Sur, North Cotabato, South Cotabato and Sultan Kudarat, are part of the group that was encountered by the 39IB in Barangay Colonsabak on April 1, 2019. In their revelation they scampered to different directions and parted different ways after the intense firefight.

Accordingly, the surrenderees were in same state paranoid and were always on the run until they took hold of an E-CLIP leaflet which was dropped on April 18, 2019. This was further reinforced by an explanation by members of the community through an E-CLIP tarpaulin posted in the Barangay which made them decide to surrender in batches.

“The community acted as our ambassadors when they took effort to explain the E-CLIP to our lost brothers and sisters, a message that the NPAs should read and understand that they are not welcome in their communities”

“Let us continue to equip our community and allow them to be our partner in building peace and resolving issues of conflict in their areas.” Lt. Gen Santos added

The scorching summer heat was eyed by the authorities as the main reason for the Black Saturday explosion inside the Davao City Police Office headquarters.

In a report by the DCPO released Sunday, it stated that “investigation conducted disclosed that the cause of the fire is due to the explosion of some explosive kept therein that might have been triggered by the scorching summer heat”.

The explosion happened inside the ammunition storage.

“Meanwhile, technical investigation of the EOD and IDMB shows minimal structural damage of the EOD facility. The blast was effectively contained by the strong reinforce concrete of Ammunition Stockroom that was the seat of the explosion,” the report said.

The ammo storage was also said to be the depository storage for recovered and rendered safe dynamites used for illegal fishing, grenades and IEDs presently kept by the said EOD Unit as court evidence. 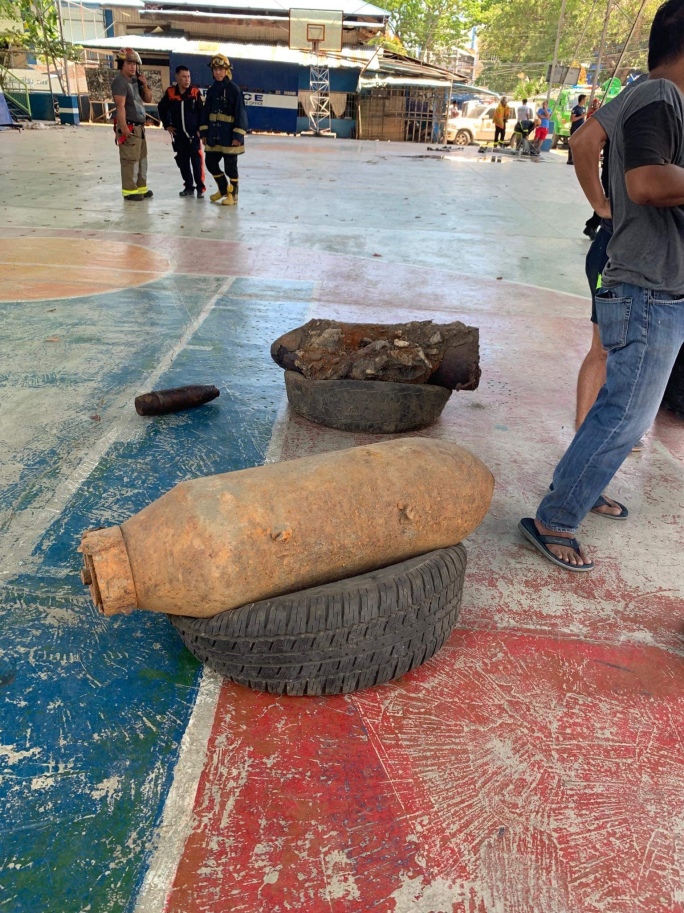 “There were no casualties from our personnel and only the Explosive Storage as well as the individual quarters of SWAT and EOD /K9 personnel were partially damaged,” stated the DCPO report.

A huge explosion was reported inside the Davao City Police Office Saturday morning.

Sketchy report showed that the explosion happened around 11:20 am of April 20 at the stockroom of the explosive ordnance division of the DCPO. 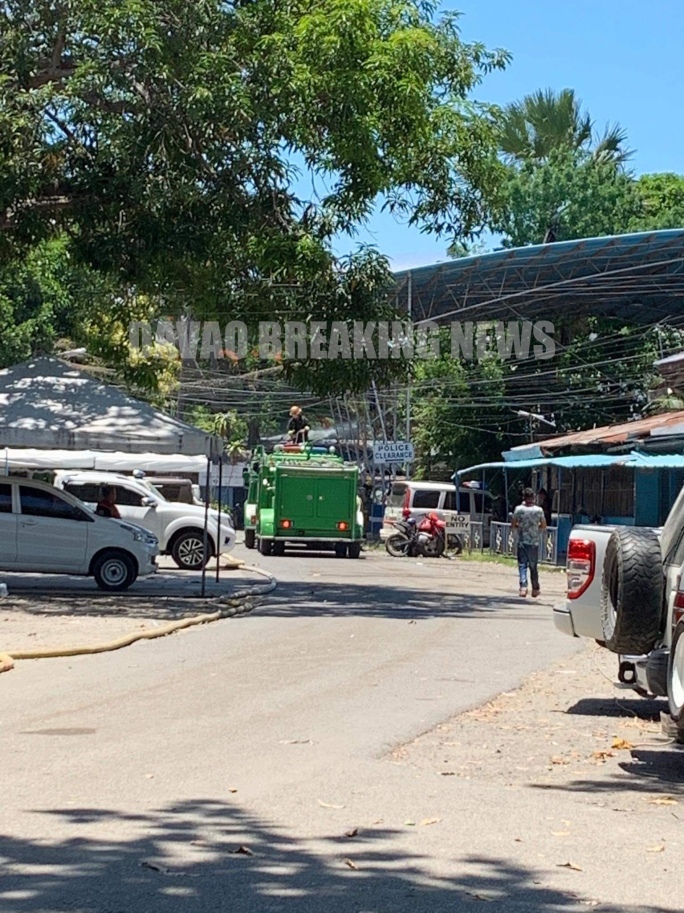 “Please be informed that at about 11:20AM April 20, 2019 the previously recovered Explosive Material/ evidence placed inside the stock room of EOD, DCPO accidentally exploded producing a loud explosion in the SATU Barracks,” the initial police report stated. 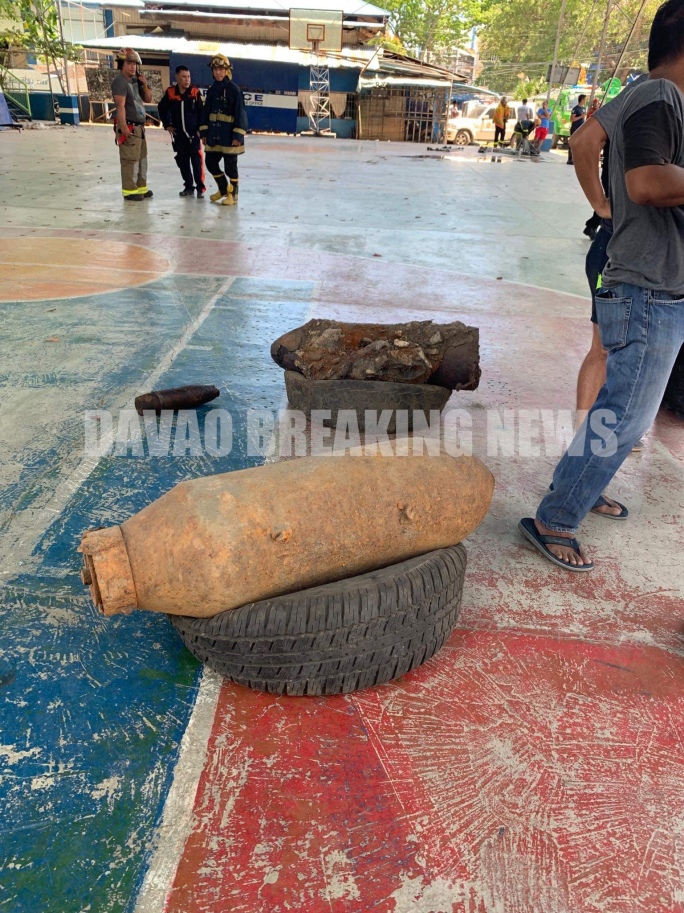 No one was reported injured from the said explosion that shook nearby buildings. Police are still investigating the incident as of this posting. 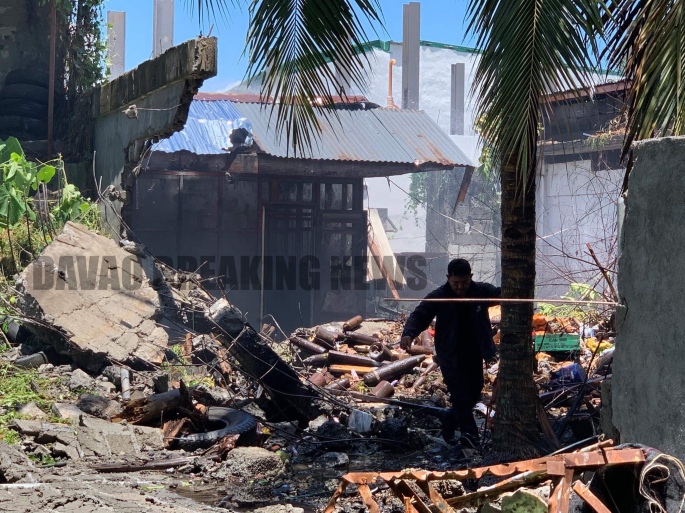