The harrowing experience of Gretchen Diez in the hands of people and mall management who should know better is deplorable, to say the least.

We commiserate with her. We call for equality and respect among all, to borrow from Senator Tito Sotto, “homo sapiens”. (Pun intended)

As the story unravelled, there were claims that what the public thought what happened was not at all what actually happened. Then there was also this side story about a transgender lawmaker berating the janitress without hearing her side of the story during a confrontation.

A lot had been said by a lot of people.

Now the real issue here is the comfort room, to be specific, privacy in a public CR.

Others see nothing wrong in allowing the LGBTQ use the comfort room for ladies. After all, there are supposedly closed cubicle in each toilet bowls of a ladies CR.

But some ladies feel uncomfortable to the idea considering that most of the LGBTQ members still have that ever deadly and dangling tool between their legs. So basically, they still urinate standing rather than sitting.

And because of too much attention brought about by the “Diez incident” some people are already abusing the situation. Take this incident reported on a Facebook account for example: 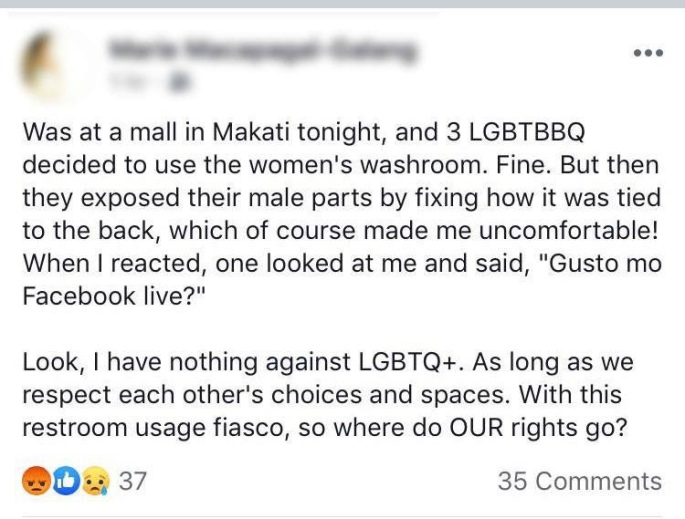 No matter how legit the issue would be, there will be people who would exploit it one way or another.

Thus the best way would be to really separate and segregate.

Have separate comfort rooms for male, female, LGBTQ. After all, what’s a separate room amidst all the “Build Build Build” that’s happening all around us?

But other than the infrastructure, what is more important is to inculcate among the people the sense of respect.

There will always be contradicting opinions in the society, but if we all have that sense of respect in all of us, I think we can all live harmoniously.