Three terrorism scenarios happened at three different barangays. The first scenario began when a terrorist group named Kidnap For Ransom Group (KFRG) checked-in at RMPC Resort, Peñaplata where the resort manager reported the presence of suspicious looking people in their resort to the police and TF Samal. Once verified, the joint forces raided the resort and apprehended two KFRG members. 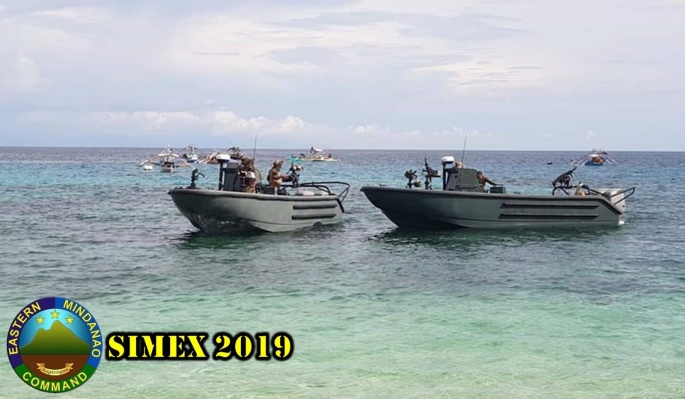 Second scenario started upon the interview of apprehended KFRG members that divulge the kidnapping plot to tourist and the presence of more or less 10 other KFRG members at Brgy San Remegio, Kaputian District which was raided by forces of JSOU2 and NAVSOU7. Further, there was a firefight that resulted to five KLG dead, four M16 rifles, three M14 rifles with bandoliers and one KFRG captured.

And the last scenario was initiated after the revelation of the captured KFRG that their commander and his cohorts are proceeding to Talikud Island where two high-speed motorized boats are prepositioned for their getaway. On the other hand, TF Davao and PNP Maritime implemented lockdown along Davao City Coast. TF Samal, PCG and NAVSOU7 immediately chased the terrorists towards the sea along Talikud Island and Kaputian District. Four KFRG were found dead and three more were captured after the encounter.

“Inter-agency Simulation exercise enhances our capabilities in responding an unexpected threat within our Joint Area of Operation. Scenarios like this can happen, so I call on everyone to continue to be vigilant and inform the nearest AFP or PNP unit in your area on the presence of any suspicious looking individual or anything left unattended for verification before it will be too late.” Brigadier Ernesto Torres Jr, Commander of Joint Task Force Haribon said.

“Security is a shared responsibility. We cannot do it alone, we cannot cover every inch of our area of responsibility to secure everyone, please work with us in looking after your community so that terrorism will not find a safe haven in Eastern Mindanao.” Santos said.

The Simulation Exercise ended at around 5 o’clock in the afternoon.