An arms cache of a dwindling New People’s Army group, previously being monitored in the Northern boundary of Davao Oriental and Davao De Oro, was discovered by the troops of 66th Infantry Battalion in an isolated area of Sitio Danawan, Brgy. Manurigao, New Bataan, Davao de Oro, afternoon of February 25, 2020.

The cache which contains four M16 rifles, one M14 rifle, two AK47 rifles, one Garand rifle, one Carbine rifle, and two M203 grenade launchers was discovered based on the information of the community and the confirmation of two former leaders of the said group who previously surrendered to Ltc. Roman S. Mabborang, Commander of 66IB and Hon. Jayvee Tyron L. Uy, Governor of Davao de Oro and Head of the Provincial Task Force Ending Local Communist Armed Conflict (PTF-ELCAC) last February 10, 2020.

The two surrenderees also revealed in their surrender the gradual diminishing of their particular group, brought about by the cascade of surrenders while some went on lie low status or have permanently left, leading them to disintegrate and merge with another group.

Meanwhile, MGen. Jose C. Faustino Jr., Commander of Eastern Mindanao Command in his congratulatory remarks, urged all units to continue supporting the peace initiatives of the Local Government Units while relentlessly running after the armed group.

“While we are focusing on pursuing those who continue the armed struggle, let us continue to support the peace initiatives of our local government unit counterparts so that, hand-in-hand, we can sustain the peace gains we have achieved the previous year,” MGen. Faustino Jr. said. 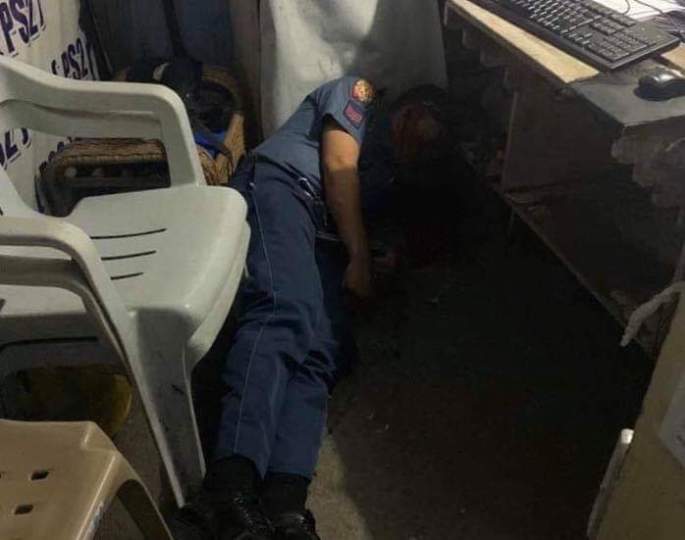 OFFICIAL STATEMENT OF CD, DCPO ON THE DEATH OF PSSG RENANTE MERCADO

In behalf of the men and women of Davao City Police, allow me to extend our deepest condolences to the family of Police Staff Sergeant Renante Dapa Mercado who was found lifeless and with gunshot wound due to accidental firing earlier this evening, February 25, 2020, inside Police Station 2- San Pedro Police Station, of this city.

Until now, we are still in shocked of this unfortunate incident that claimed the life of our dear police officer.

Furthermore, I would like to ask for people’s understanding and compassion to stop spreading “false and malicious messages” to social media out of respect to the fallen officer and his grieving family.

Rest assured that under this leadership, his bereaved family will be extended with necessary financial assistance and we will delegate personnel to assist his family members in processing his claims.

Indeed, his untimely passing is difficult to bear, but I hope that his family can take solace in the fact that PSSG Mercado has served well his country.

Meanwhile, with this kind of unfortunate and tragic event that some of my men suffered due to accidental firing, most likely everyone needs a sobering reminder on prevention measures on gun safety with seriousness and urgency.

Immediately, I have directed the Chief, Administrative and Resource Management Unit to conduct a Refresher Course on Gun Safety and Responsible Gun Ownership Seminar to selected personnel who will re-echo their learnings in their respective police station. This will serve as a review on how to handle their service firearm properly to avoid accident on self or other persons.

It is certain that we will be serious in enhancing the ability and competence of our police officers in gun safety and marksmanship not to have similar incidents in the future.

It has come to my attention that Municipality of Sta. Cruz, Davao del Sur Councilor Jose Nelson Sala Sr., or Tata Sala, has been mentioning my name and publishing photos of us together taken during public events to show appearance of influence.

The public is hereby informed that I do not have a close personal relationship with Mr. Sala. I am not in any way involved in his transactions — whether legal or illegal.

I call on our law enforcement authorities to enforce the law equally on all, even if they are close allies of President Duterte.

The law applies to all — whether they are a friend or not. I believe this is the essence of the Duterte administration. 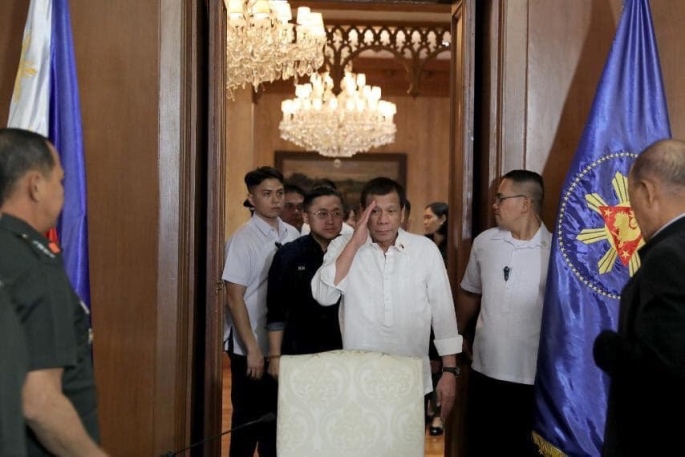 Sen. Christopher “Bong” Go reiterated his commitment to push for measures to provide all Filipinos with better access to affordable essential medicines. He expressed this as President Rodrigo Duterte signed Executive Order (EO) No. 104 dated February 17, 2020, which regulates the prices of select drugs including essential medicines most commonly prescribed to patients.

The EO was signed a few months after Go, the Chair of the Senate Committee on Health and Demography, vowed to personally discuss the matter with the President.

At the Senate session on November 5, Go stated that he would “suggest to the President the inclusion of all essential medicines in the proposed list of expanded MDRP (Maximum Drug Retail Prices) and for its immediate release to complement the Universal Health Care Law.” 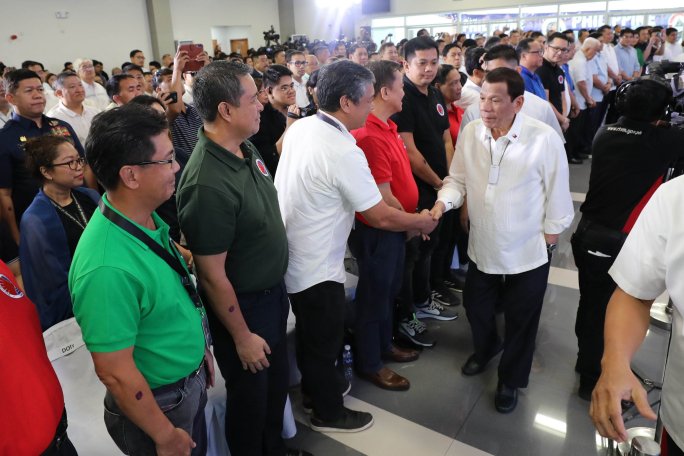 The EO also orders representatives from the Department of Health (DOH) and the Department of Trade and Industry (DTI) to “convene and review” the prices of the remaining 36 drug molecules or 72 drug formulas previously proposed to be included in the MRP and MWP list.

The President signed the EO, as recommended by DOH and echoed by various senators including Go, in accordance with the provisions of Republic Act (RA) No. 9502 or the Cheaper Medicines Act of 2008, which grants the President of the Philippines the power to impose maximum retail prices over drugs and medicines sold in the country, upon the recommendation of the DOH Secretary.

“Healthcare is a right, not a commodity,” Go regularly emphasizes in his statements. He also said that he is supporting the initiative to control the prices of select drugs and medicine as “an advocate of universal healthcare access for all Filipinos” and “to ensure that our countrymen and women gain easier access to cheaper quality medicines.”

He added, “Essential medicines in the Philippines continue to be exorbitantly priced relative to international counterparts. Generic drug prices are also approximately up to four times higher than international reference prices.”

In selecting which drugs and medicines to impose MRP and MWP on, the President, in the EO, stated the following criteria:

a. Drugs that address the health priorities of the general public especially those that account for the leading causes of morbidity and mortality;
b. Drugs that have high price differentials/arbitrage compared to international prices;
c. Drugs that have limited competition in terms of lack of generic counterparts or lack of market access to these products; and
d. Drugs where the innovator product is the most expensive yet most prescribed and/or dispensed in the market.

The EO further states that the MRP will be imposed on all public and private retail outlets, including drugstores, hospitals and hospital pharmacies, health maintenance organizations, convenience stores and supermarkets and the like.

MWP, meanwhile, will be imposed on all manufacturers, wholesalers, traders, distributors and the like.

The drugs and medicines included in the MRP and MWP list will be subject to review by the DOH, in consultation with the DTI, within six months from the effectivity of the order and every six months thereafter.

Violations of EO No. 104 will be dealt with in accordance with RA 9502 and other related laws.

The objective of the EO is to improve access of Filipinos to healthcare through the imposition of maximum retail prices on drugs that address the top causes of morbidity and mortality in the country.

The Senator assured the public that he and the President will continue to serve and protect the welfare and interest of Filipinos who need government attention the most, especially the most vulnerable sectors of society and the generations of Filipinos to come. 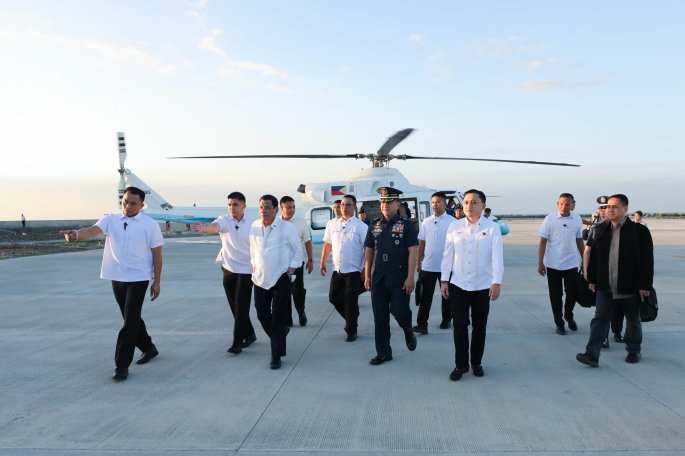 Go explained further that the expanded list under MDRP will complement the UHC and the Malasakit Center Act in providing accessible quality healthcare for all Filipinos.

Go, during Monday’s radio interview, also announced that the Implementing Rules and Regulations (IRR) for the Malasakit Center Act will be signed next week.

Senator Christopher Lawrence “Bong” Go expressed his optimism following the inauguration of the newly completed initial phase of the Sangley Airport Development Project (SADP) which was led by President Rodrigo Duterte on Saturday, February 15, 2020, in Cavite.

The airport, which is seen to help decongest the Ninoy Aquino International Airport (NAIA), was originally targeted to be completed by March 2020. Yet, upon the directive of the President, Department of Transportation (DOTr) Secretary Arthur Tugade committed to meet an earlier deadline.

According to Go, the completion of SADP not only achieves another milestone in the “Build, Build, Build” (BBB) program of the Duterte Administration but will also help boost the country’s economic growth. As one of the key infrastructure projects of the BBB program, the new airport will help improve the Philippine tourism and aviation industry.

In his speech, President Duterte commended Tugade for completing the project ahead of schedule, and for wisely spending the government’s budget.

“Tayo may pera. Kita mo si Art (Tugade). I asked him, ‘How much did you spend for this? Seven hundred million? Oh, really?’ Look what the 700 million can do in the hands of a competent, a bright (government official). Ilocano ‘to,” Duterte said.

The President also said that he will use the airport for his last flight to Davao after his term ends in 2022.

The airport’s facilities will initially cater to commercial cargo operations. It will be utilized for general aviation and turboprop operations from 6 AM to 6 PM. DOTr also had previously done an operational dry run though a maiden Cebu Pacific cargo flight in October last year.

SADP’s second phase, worth P500 million, will begin this year and is expected to be completed within eight months. It will involve further improvement of the drainage system of the airport and expansion of the existing runway to accommodate 4C aircraft or turbo jet planes. 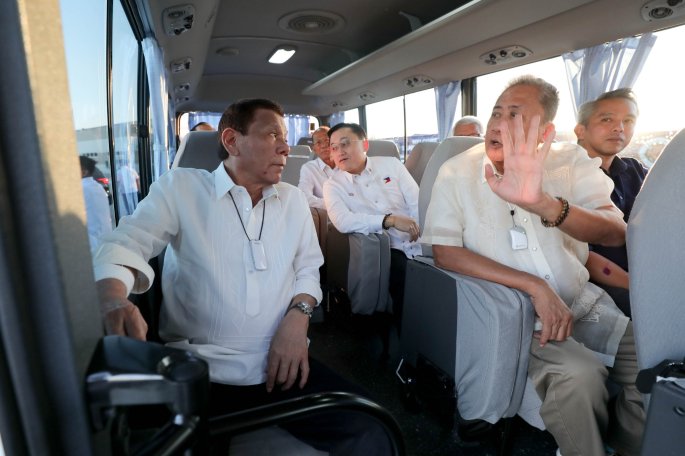 The DOTr and the National Housing Authority (NHA) are also in coordination for housing projects for affected soldiers from the Philippine Navy and Philippine Air Force.

Meanwhile, Cavite Governor Jonvic Remulla presented the proposal on the entire Sangley Point International Airport (SPIA) project which will be funded by a private consortium. This project aims to decongest international flights in NAIA through the expansion and development of the Sangley Airport as an international airport.

In previous statements, Go advised government agencies in charge of infrastructure development to abide by President Duterte’s order to ensure that infrastructure projects under the “Build Build Build” program will be ready for use to benefit the general public. The Senator manifested this during the Senate plenary deliberations on the 2020 budget.