During an interview on DZRH given on Wednesday, September 23, Senator Christopher “Bong” Go spoke with overseas Filipino worker Rose Policarpio who had just returned to the country after being acquitted of murder in Saudi Arabia.

During their exchange, Policarpio thanked Go for extending assistance and support to help her restart her life. She also expressed her gratitude to the Department of Foreign Affairs, Overseas Workers Welfare Administration and Department of Social Welfare and Development for helping secure her release and assisting her when she came back to the country.

The Senator insisted that he was merely doing his job as a public servant. He encouraged Policarpio to come to him if she needs more assistance, such as securing employment and called on all concerned agencies to extend to her other forms of support the government could provide.

Policarpio, then 31, had flown to Saudi Arabia in 2013 to work as a food server but then turned to work as a domestic helper. Three men broke into her employer’s house and killed the Lebanese woman. Policarpio claimed she fled the scene of the crime because the perpetrators attempted to rape her. Based on the official police report, Policarpio had gone to the police and reported the incident. However, she was arrested and jailed instead.

Policarpio was incarcerated for six years and was finally released on January 2019, after she was found innocent of any crime. According to Philippine Ambassador to Saudi Arabia Adnan Alonto, Policarpio would have faced the death penalty had she been convicted. She finally flew back from Riyadh on September 21, 2020 and arrived in the Philippines on September 22.

Throughout the ordeal, the DFA’s Office of the Undersecretary for Migrant Workers’ Affairs, through the help of the Philippine Embassy in Riyadh, worked closely and made strong representations on her behalf. Their timely legal assistance ensured her rights were protected under Saudi laws.

During the interview, Go expressed concern that there remained many cases similar to Policarpio. His office alone is presently monitoring death penalty cases and other calls for help from Filipinos abroad.

He recalled a similar case he had personally helped which involved an OFW who had been convicted of murder in Bahrain. Roderick Aguinaldo was imprisoned for four years before he received a royal pardon from the Bahraini government. Aguinaldo returned home to the Philippines last June 7.

Go lamented that while there are specific government programs that provide assistance (e.g. legal counsel and psychosocial counseling) to distressed OFWs, they are scattered across various national agencies.

For this reason, the Senator is pushing for the creation of a department which shall bring together these agencies and be entirely dedicated to handling the affairs of overseas Filipinos. In 2019, he filed Senate Bill No. 202 which sought to create this department. A second iteration, SBN 1835, was recently filed which takes into consideration inputs from concerned executive agencies.

It will also exercise administrative supervision over the Philippine Overseas Employment Administration and OWWA which shall be attached to the department. 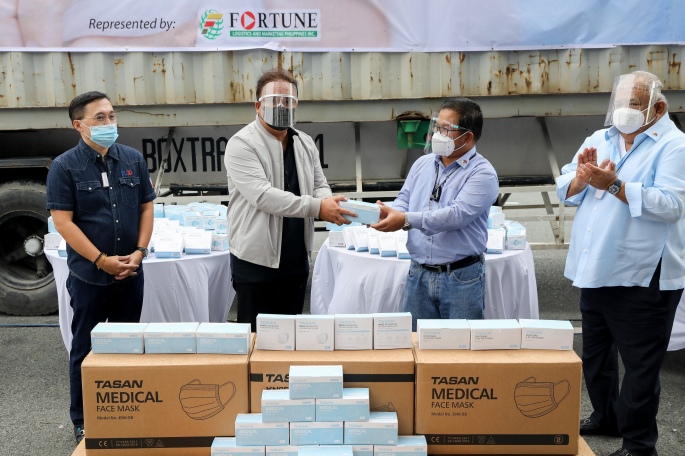 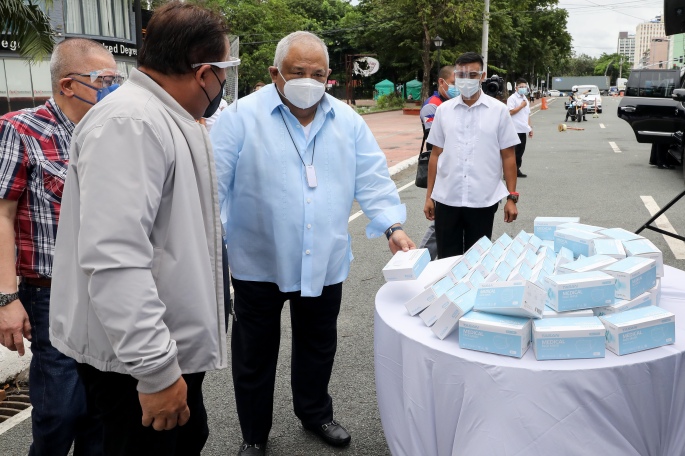 Executive Secretary Salvador Medialdea and Senator Christopher Go pose for prosperity with Fortune Logistics and Marketing Philippines and other officials during the ceremonial turnover of the one million face masks donated by Tasan Health and Medical Tech (Shanghai) Company Limited at the Rizal Park Hotel in Manila on September 17, 2020. The face masks will help the government in combating COVID-19. REY BANIQUET/ PRESIDENTIAL PHOTOS

Over the past days, quite a number of lawmakers have called me as they expressed their disappointment and consternation over the fate of their respective allocations and budgets from the hands of the current House leadership.

Although I am an ex officio member being a Deputy Speaker, I have respectfully and clearly told them that their concern is something that I would rather stay away from — out of delicadeza because my father is the President.

Most of these concerns shrouded doubts over the process and mistrust of the lawmakers ruling the House, those who are acting as if they are bigger than their colleagues. Respectfully, I told them that I did not want to get involved.

The text message that I sent to another lawmaker — and is now making the rounds — was an expression of my personal dismay upon hearing the concerns of my fellow lawmakers.

It was the same message that I sent after one Congressman from the Visayas bloc dragged my name into the issue even after I have already strongly made myself clear over this issue.

Now as Congress continues to be hounded by the issue of budget — something that finds its way up to the current House leadership, how it treats its members, how it approves allocations and budgets with fairness or lack of it — let me reiterate my position. I do not want to get involved, however, I wish to help my fellow lawmakers find answers to their questions or remedies to the budget that they proposed for their people.

I could only hope that Congress and its members will be able to resolve this issue before everything goes out of hand, before it could bludgeon the credibility of the institutions and inflict damage beyond repair.

I leave this issue to the members of Congress as I believe that it is within their rights as elected officials to come up with a favorable solution to an issue that could badly impact the development of their districts and their people.

As a collective body, the members of Congress have the power to change the course of which the leadership is leading them to and address a problem to ensure that the programs and projects for their people are delivered and delivered expeditiously.

The members of Congress have the power to correct everything that they perceive as wrong happening within the Lower House or change leadership as they demand fair treatment and reforms.

If the members of Congress will push for a change in House leadership, as a reaction to their sentiments, obviously I would be among the casualties because I am a deputy speaker. I am ready to accept the consequences.

As much as I am part of Congress with a duty to be involved in the goings on inside, I cannot discount the fact that I am a Duterte. Anything that comes out of my actions or mouth could be construed or manipulated as having the blessing of my father.

And so I would rather suffer or work in silence rather than sacrifice the supposed independence of the House from the Palace.

Let us work for the country and the Filipino people.

The House of Representatives is moving to pass a law that would establish a minimum wage for nurses in private hospitals.

Proposed House Bill No. 7569, authored by Representatives Paolo Duterte, Claudine Bautista and Eric Yap, directs the National Wages Productivity Commission of the Department of Labor and Employment to establish an increased minimum wage for nurses in private hospitals.

The following factors will be take into consideration in determining the minimum wage for nurses in private hospitals to wit:

1. cost of living
2. wage established for work in public sector or in other jurisdictions by employers who voluntarily maintain reasonable standards
3. location of the private hospital
4. private hospital’s bed capacity
5. fair return of the employer’s capital

“A minimum wage to be established under this Act for nurses in private hospitals shall be that which is adequate as is economically feasible to maintain the minimum standard of living necessary for the health, efficiency, effectiveness and general well-being of nurses in private hospitals, and must also take into consideration the particular circumstances of private nurses’ government counterparts. Additionally, nurses who are receiving salaries higher than the minimum wage that will be set by the NWPC shall be adjusted and increased accordingly,” the proposed bill read.

The bill also stipulates that nurses working in private hospitals shall be provided all the benefits found under the Labor Code, Magna Carta of Public Health Workers or Republic Act No. 7305, and other relevant laws, government announcement, rules, or regulations, including, but not limited to, overtime pay, night-shift differential, on-call pay, hazard pay, subsistence allowance, housing allowance, free annual physical examination, and free hospitalization.

The bill also provides fine of not less than P100,000 or not more than P1 million for hospitals for each violation once it becomes a law. Any nurse who becomes a victim of the violation shall also be entitled to back wages and full payment of unpaid benefits, as well as to the refund of attorney’s fees that may have been incurred as a consequence of any attempt by a nurse to enforce his right under this Act.

In their explanatory note, House Rep. Duterte said that private nurses only receive an average of P9,757 per month while government nurses receive anywhere from P19,845 to P30,531 per month. Abroad, Filipino nurses receive from as low as P114,000 to as high as P200,000 per month salary plus benefits.

“This Bill is not merely filed to increase the financial benefits of nurses, but to show that the State is supporting our nurses and valuing our healthcare workers as they battle the pandemic and other deadly diseases head-on. This measure is simply the least we can do to support our frontline health workers. As such, earliest approval of this Bill is earnestly sought,” stated the authors.

As the Inter-Agency Task Force Yolanda for the Unified Implementation and Monitoring of Rehabilitation and Recovery Projects and Programs in the Yolanda-Affected Areas (IATF-Yolanda), whose term expired last August 2020, is being recommended for extention, Senator Christopher “Bong” Go appealed to agencies involved to finish the job before the end of President Rodrigo Duterte’s term.

“Get the job done, from start to finish, ensure that new houses are of quality living standards, and that every single peso is used to fully rehabilitate affected communities,” he appealed.

The Senator pointed out that major infrastructure construction has been temporarily halted or delayed partly because of the current health crisis caused by the coronavirus disease (COVID-19) outbreak in the country and with the imposition of community quarantines.

Super Typhoon Yolanda, or internationally known as Typhoon Haiyan, is one of the most powerful and one of the strongest landfalling tropical cyclones ever recorded. It also holds the title as the deadliest typhoon in the Philippines. It made landfall in the eastern part of the country on November 8, 2013 hitting Eastern Samar first, killing more than 6,000, and displacing and affecting millions mostly in central Philippines.

One of the integral components of the Yolanda Comprehensive Rehabilitation and Recovery Plan is the Yolanda Permanent Housing Program. The task force continues to construct housing units and energize permanent settlements with access to clean drinking water.

One of the issues that Go raised even before he became a Senator is the need for proper housing for Filipinos. On his first month as a Senator in July 2019, he filed Senate Bill No. 203, entitled “National Housing Development, Production and Financing Act of 2019”.

SB 203 aims to institutionalize a program to address the housing needs of Filipinos through generating and mobilizing sustainable funds for housing.

Even before joining the Senate, Go was already advocating for the township concept for government’s housing and resettlement programs. The present Yolanda Permanent Housing Program integrates the concept, aiming not only to build houses but also to create livable, thriving and disaster-resilient communities under a township approach to rural settlement development. IATF-Yolanda’s township concept has three major components: (a) provision of daycare, (b) construction of schools, and (c) establishment of health centers within or nearby the housing project sites. 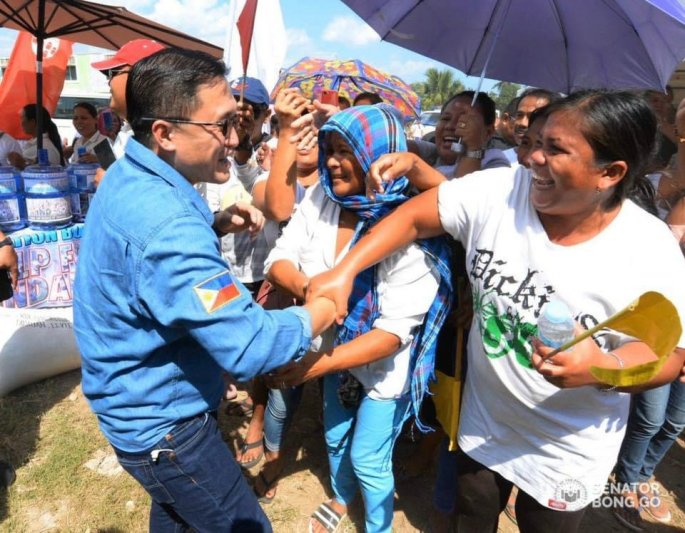