The Office of Senator Christopher “Bong” Go on Thursday, March 25, extended additional aid to the residents of the Leon Garcia community in Agdao, Davao City after their houses were damaged during a fire which spread through the area late last year.

A total of 66 beneficiary families were given meals, food and medicine packs, vitamins, medical-grade masks, and face shields during an activity conducted by the Senator’s team at the Leon Garcia Sr. National High School.

Selected recipients were provided new shoes or bicycles. Others were given computer tablets to help their children participate in the classes being carried out under the blended learning approach.

As part of ongoing government efforts to deliver assistance to communities recovering from crisis situations, personnel from the National Housing Authority were also present to assess households in need of financial support to repair their damaged houses.

The Departments of Health, and Social Welfare and Development had previously distributed hygiene kits with medicines as well as cash assistance and food packs, respectively.

As vice-chair of the Senate Committee on Public Order, Go committed to push for the enactment of a measure which will enhance the response capabilities of the Bureau of Fire Protection and help minimize the risk of similar accidents from reoccurring.

Senate Bill No. 1832, a bill he authored and co-sponsored, directs the BFP to implement a modernization program to facilitate the acquisition of new fire equipment, provision of specialized fire training, and hiring of more firefighters. It will also establish Fire Protection Services and rescue hotlines as well as mandate monthly fire prevention information drives in every local government unit.

SBN 1832 was passed on the third and final reading by the Senate last March 8.

The Senator, as the Chair of the Senate Committee on Health, also encouraged everyone to prioritize their health while diligently following the government-issued protocols against COVID-19.

He offered to assist any beneficiary who cannot access medical care, and encouraged them to seek further aid from the government by visiting the Malasakit Center at the Southern Philippines Medical Center.

The center is a one-stop shop which provides patients quick access to the medical assistance programs offered by the DOH, DSWD, Philippine Health Insurance Corporation, and Philippine Charity Sweepstakes Office. 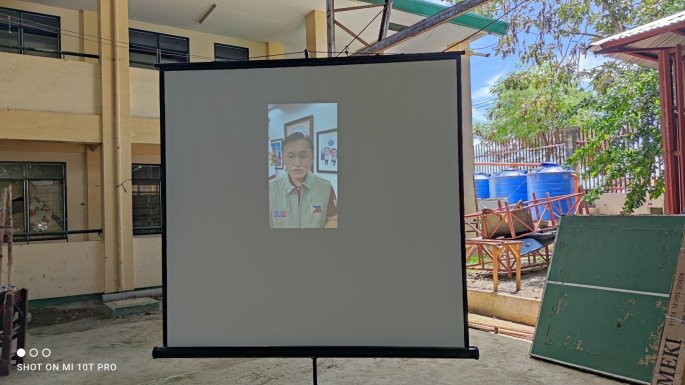 The distribution activity was conducted in batches to comply with minimum health standards in order to avoid the spread of COVID-19. Necessary health protocols were also in place throughout the activity.