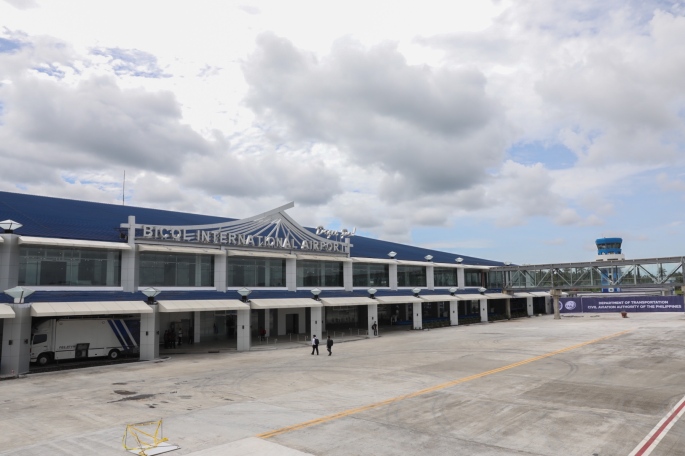 President Rodrigo Duterte, together with Senator Christopher “Bong” Go, Department of Transportation Secretary Arthur Tugade, and other officials, attended the inauguration of the Bicol International Airport (BIA) in Daraga town, Albay province on Thursday, October 8. The BIA, considered the first international airport in Luzon south of the National Capital Region, is expected to boost tourism and economic development in the Bicol Region.

The airport includes a 2,500-meter runway with take-off capabilities and night landing, as well as cargo and passenger terminal and an air traffic control tower, fire station, parking lot, and amenities.

According to the Department of Transportation, the BIA, dubbed as the “most scenic gateway”, generated 755 jobs during its construction and is set to create 1,100 more indirect jobs once operations commence.

Meanwhile, Go also reassured the public that he will continue to pursue the completion and expansion of infrastructure development initiatives to achieve a more equitable economic development across the country.

Go has been vocal in his support for the country’s infrastructure development. He said that the construction of new airports will bring in jobs and economic opportunities outside Metro Manila and will provide livelihood to Filipinos, especially those who were left jobless due to the pandemic.

As Vice Chair of the Senate Finance Committee, Go has strongly supported the funding of numerous infrastructure initiatives nationwide.

Earlier, Go attended the opening of the first 18-kilometer section of the Central Luzon Link Expressway project with Duterte on July 15 in Tarlac City. The newly opened highway is intended to reduce the usual journey time between Cabanatuan City and Tarlac City from 70 minutes to just 20 minutes once it is fully operational. It will also be toll-free.

As a vice presidential candidate in the upcoming elections, he vowed to ensure that the positive change initiated by President Duterte will be continued in order to provide a more comfortable life for all Filipinos.

“I fully hope that in December we will be celebrating not only the new Miss Universe here in Israel, but most importantly, the end of the world pandemic.”

The global MISS UNIVERSE® beauty pageant will be held for the first time in its history in Israel. The city of Eilat was chosen to be the host city of the competition, which will mark its 70th anniversary this year.

Israeli producer Tali Eshkoli and Los Angeles-based producer Assaf Blecher are responsible for bringing the Miss Universe pageant to Israel, which will be run by the Miss Universe organization in cooperation with the Israeli Ministry of Tourism and the Eilat Municipality. From the end of November, competition contestants will arrive in Israel for three weeks of TV events, broadcast live around the world. These include the semi-final and final events, the national costume show, and other gala events such as the red-carpet event, events in the community, charity events and more. The 70th Miss Universe Competition will once again be hosted by legendary entertainer Steve Harvey.

Delegations from about 100 countries are expected to attend the pageant in Israel, including more than 1,200 members of official delegations, hundreds of journalists and TV crews, thousands of pageant enthusiasts and tourists, more than 100 American celebrities, including top-tier artists and world-famous judges. Every year, the event is widely covered in the media and it will add Israel to the map of countries that have previously hosted the prestigious pageant.

The choice of Israel as the host country once again underscores Israel’s attractiveness, its rich history and the wide variety of spectacular tourist and resort sites that Israel has to offer pageant viewers around the world. An international event of this scale will positively impact awareness and image of Eilat and Israel as a leading tourism destination and a world-renowned international brand.

The Miss Universe Organization (MUO) is a global community that empowers women to realize their goals through experiences that build self-confidence and create opportunities for success. The organization’s programs provide the women who participate an international platform to affect positive change through influential humanitarian and professional efforts. The contestants and titleholders are leaders and role models in their communities, develop personal and professional goals, and inspire others to do the same.

“We in Israel are delighted to host the 70th anniversary celebrations of the iconic Miss Universe pageant. Israel is a beautiful land of creativity and innovation and we have successfully faced the COVID-19 crisis head on. Therefore, today we are among the first countries to host an international event – the unifying Miss Universe.

“We are proud to host the 70th anniversary celebrations of the Miss Universe pageant in Eilat – a year-round sea and sun resort. We see this event as an opportunity to leverage Eilat and the Negev as an attractive tourism destination.

Tourism Director for India and the Philippines Sammy Yahia:

“What a great opportunity to host Ms. Universe this December in Israel. I know that some Filipinos were crowned with this prestigious competition. I wish all participants good health and good luck and I look forward in seeing you all soon”.

Tali Eshkoli, Miss Universe producer in Israel: “The State of Israel once again proves that it stands alongside leading countries in the world that are capable of hosting international events of such significant size. Without a doubt, we have a great and extraordinary opportunity to expose Israel to hundreds of millions of viewers around the world, and I thank the Ministry of Tourism and the Eilat Municipality for their fruitful cooperation.”

Paula M. Shugart, president of the Miss Universe Organization: “Israel has been on our shortlist of host countries for a number of years due to its rich history, beautiful landscapes, myriad of cultures and appeal as a global tourist destination,” said “As we sought an impressive location for our 70th anniversary celebration, it became clear through our conversations with acting mayor Lankri and the Israeli Ministry that Israel has the best resources to host MISS UNIVERSE in December.”

The Philippines was already crowned four Filipina Miss Universe, Gloria Diaz in 1969, Margie Moran in !973, Pia Wurtzbach in 2015 and Catriona Gray in 2018. 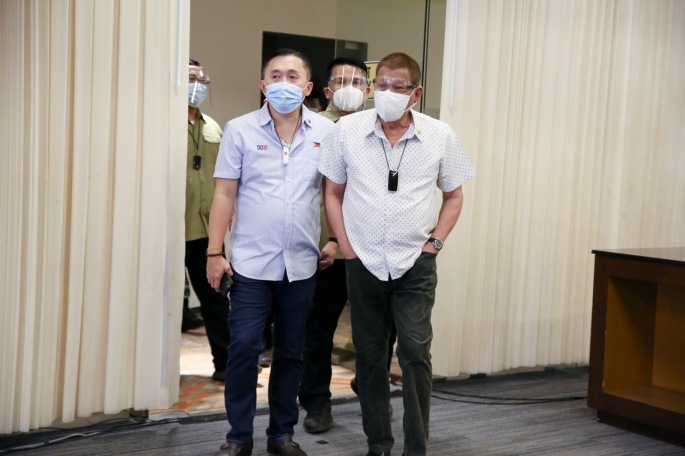 According to Go, Duterte will be flying back to Manila to meet the Inter-Agency Task Force on Emerging Infectious Diseases (IATF-EID) on Saturday.

In a phone interview, Presidential Spokesperson Harry Roque told Palace reporters that the President and concerned government officials will also discuss what will happen to the travel ban imposed on travelers from the United Kingdom, and if a new travel ban needs to be imposed on travelers coming from other countries where the new COVID-19 strain has been confirmed.

The new COVID-19 strain has caused a surge of new infections in the United Kingdom, prompting countries to shut their borders to the UK. Meanwhile, countries like Singapore, Israel, Hong Kong, Australia, Denmark, Italy, Gibraltar, and the Netherlands have already reported their first cases of the new strain.

The Philippines, on the other hand, has already imposed a temporary travel ban of flights from the United Kingdom since December 24 until the end of the year. However, outgoing flights are still allowed, following current exit protocols.

Meanwhile, Go continued to urge the public to strictly abide by necessary health protocols as they celebrate the holidays.

He reiterated that the government will prioritize the poor and vulnerable sectors, as well as frontliners, in gaining access to COVID-19 vaccines once a safe and effective vaccine is approved and made available to the public.

Meanwhile, Go also told the media that the President is scheduled to sign the General Appropriations Act of 2021 on December 28. 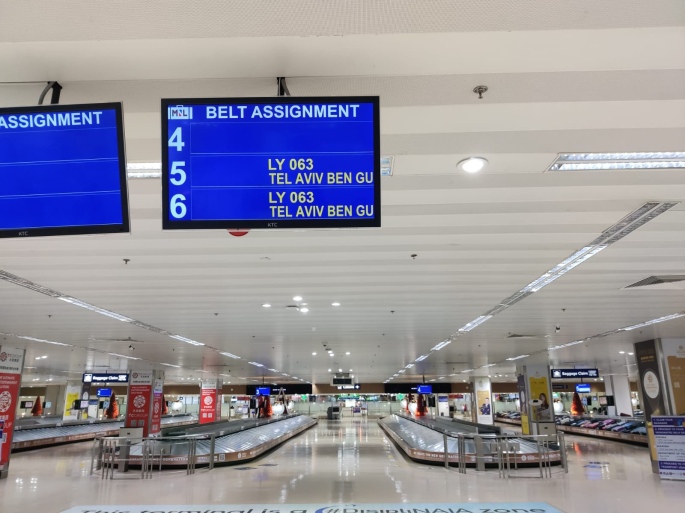 The El Al Israel Airlines Ltd. with Flight No. LY 063 landed at the Ninoy Aquino International Airport (NAIA) this morning, 14 October 2020, at 6:25 AM. Ambassador Rafael Harpaz said that this historic flight symbolizes the good relations between Israel and the Philippines.

It was in November 2013 when two Israeli planes carrying humanitarian aid first touched the Philippine soil via Cebu airport to assist the Philippines in wake of Typhoon Yolanda. It was one of the biggest relief operations that Israel has ever conducted. The Israeli delegation of doctors, nurses, and paramedics and Israeli Foreign Ministry and Defense personnel provided a field hospital and helped repair damaged infrastructures such as schools and water facilities particularly in Bogo, Cebu.

Onboard the El Al plane were 250 Filipino students from different agriculture universities and colleges in the Philippines who completed their 11-month on-the-job training course of combined academic learning and practical work in the latest farming techniques and technologies in Israel. The program offered the students the opportunity to study at specialized agricultural academic centers and work in modern farms throughout Israel. Approximately 5,000 Filipino students already participated in this Agro Studies program. Another batch of flight from Israel to the Philippines is scheduled later on month. 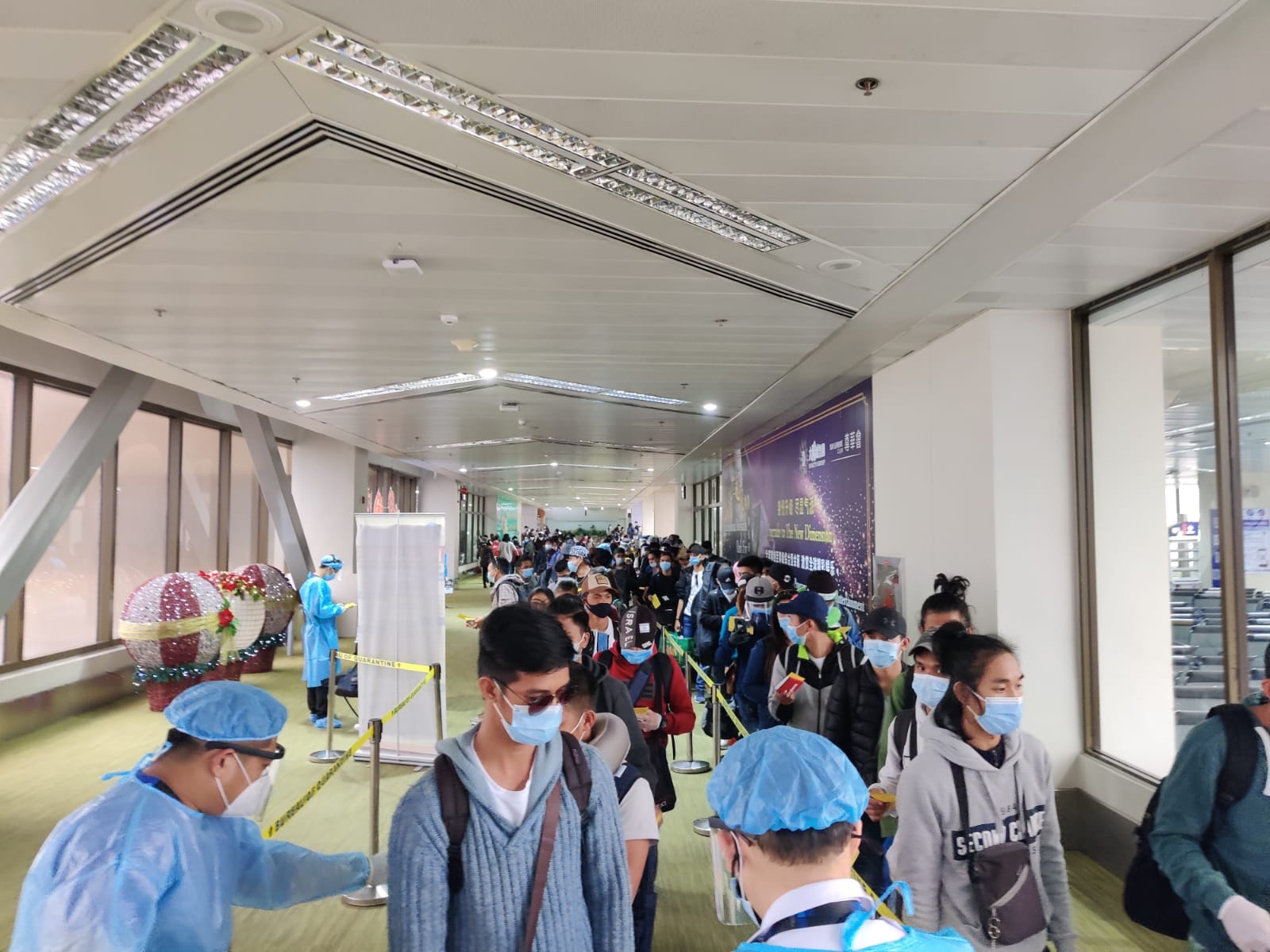 The Embassy looks forward that after the COVID-19 pandemic and through the existing visa-free agreement, more Filipino tourists will come to visit Israel and vice versa; and hopefully, the direct flight services between the two countries will be implemented soon. 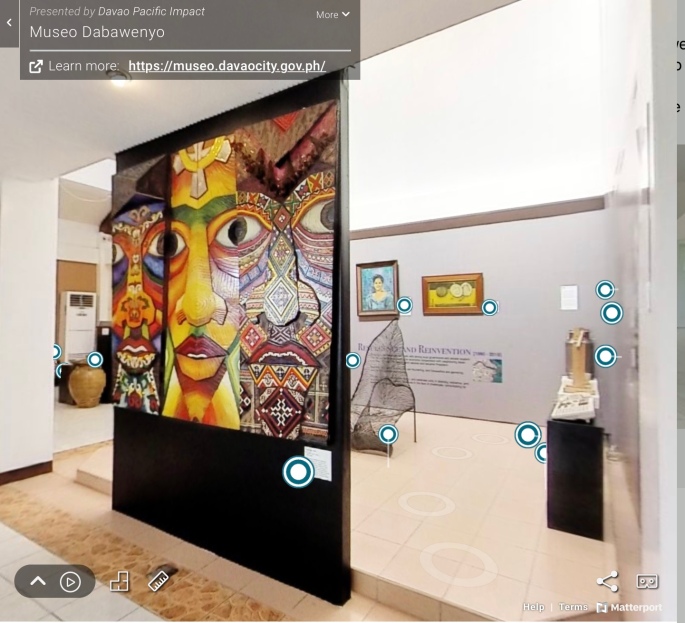 The Davao City government is taking Dabawenyos and tourists into Davao City’s rich culture and historical heritage in the newly-launched Museo 3D virtual tour in line with the celebration of the Kadayawan Festival 2020.

The public can take a glimpse of the rich cultural and heritage of the city either through bit.ly/2Q0vC92  or on the Museo Dabawenyo Facebook page  – https://www.facebook.com/museodabawenyo.

Winnie Rose Galay-Bulig, the head of Museo Dabawenyo, said that the 3D virtual tour is the first in the city and Mindanao. It is created for Davao City by the Davao Pacific Impact to help promote Museo Dabawenyo and allows people to explore the culture and heritage of the city since the museum is temporarily closed due to Covid-19. 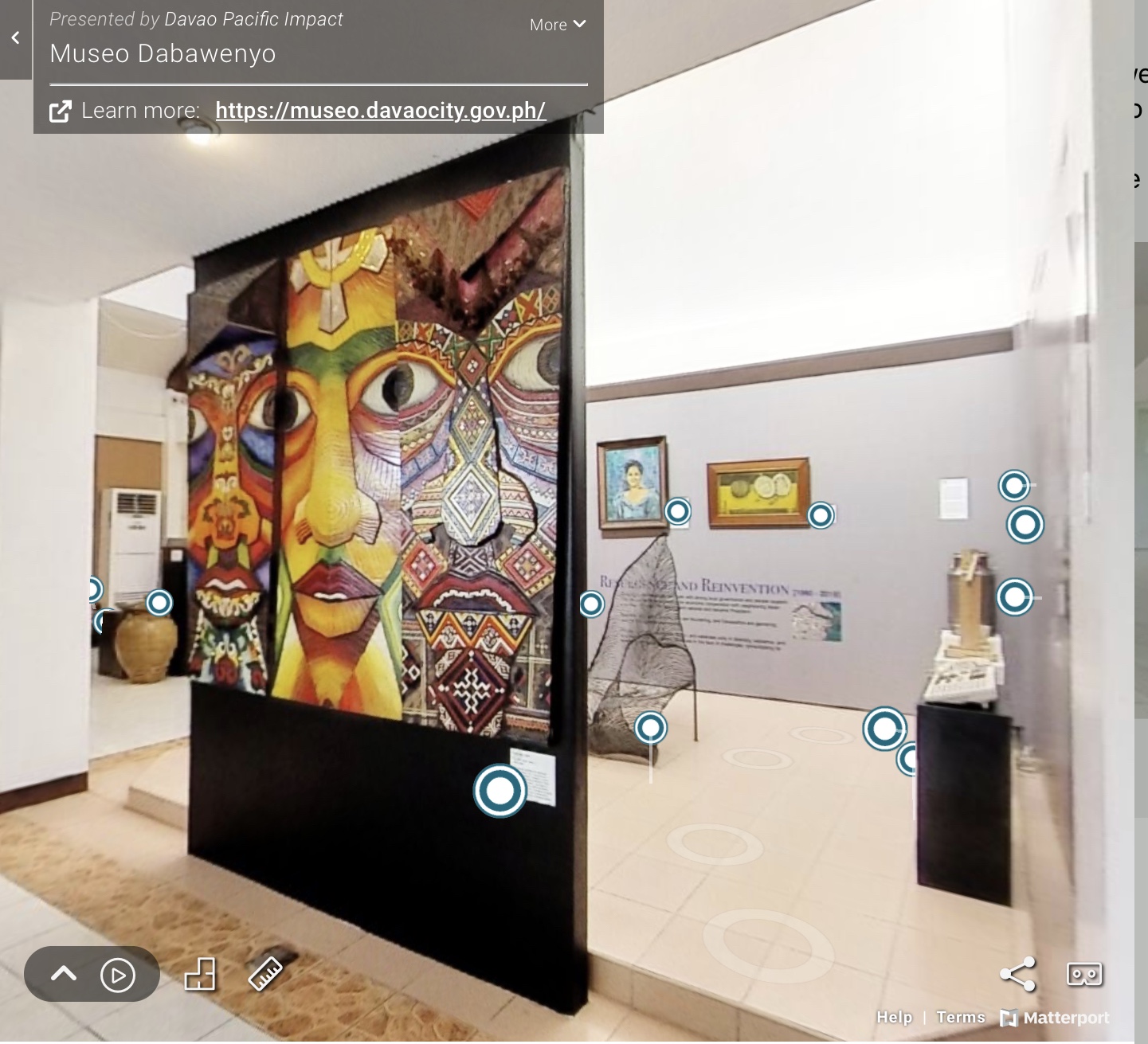 It is interactive wherein the panorama contains hotspots that enable the viewers to explore and navigate the Museo Dabawenyo.

“It is very informational. They can see plots there and when they click it, descriptions or facts about artifacts found inside the museum will pop-up,” she added.

Bulig has invited everyone to share the Museo 3D virtual tour to reach a wider audience, especially tourists who wish to visit the city and learn more about Davao. Also, students who wish to learn and research about the artifacts of the city.